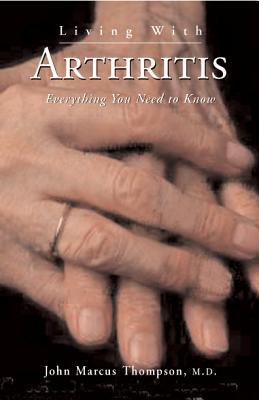 Depending on which Doctor you ask, I have either Rheumatoid Arthritis or Lupus. The symptoms are extremely similar for both…and the results are not far off each other either. They are both autoimmune diseases and are treated with the same drugs, so I don’t sweat the discrepancy at all. As a result though, I find myself pouring over Internet sites and various local bookstores for more info on both. I’ve skimmed many a book and Living With Arthritis: Everything You Need to Know caught my attention enough to go ahead and purchase.

Living With Arthritis is written by a Rheumatologist named John Marcus Thompson. What he promises in the forward is to tell you things that your own doctor probably won’t. That’s how he nabbed me. I want to know it all. I want to know what to expect both worst case and best case. Unfortunately, Thompson didn’t really deliver as promised. I learned little new, and got some conflicting info from this book… but I’m getting ahead of myself.

Thompson covers all the various forms of Arthritic ailments, both inflammatory and non-inflammatory. He tries to cover as much ground as possible on what you can expect to happen with each, various symptoms, but all he manages to do in many instances is talk himself in circles, never really nailing himself down to an answer. This is very frustrating. Granted, I may know more than most already with the amount of time I’ve spent scouring the web so perhaps that’s why he had no new info for me… but I don’t really think that’s it at all… he just seems to skim the surface.

He goes over the various tests that should be run, but aren’t always followed through. Here’s where the first glaring discrepancy happened. With regards to Lupus he mentions the Antinuclear Antibody (ANA) Test. Now, the vast majority of what I’ve found is that the ANA is not anywhere near reliable. Some Lupus patients go 20 years without a high ANA. It seems to be that for the most part a high ANA is a good indicator of Lupus, but a normal ANA is not an indicator that the patient is Lupus-free. Thompson makes the statement that the ANA comes out negative in only 5% of the cases. Huh? Just does not jive with everything else I’ve read on the subject at all… which makes me a bit leery about everything else in this book.

The other thing he goes over is various medications and treatment modes for each diagnosis. This was great the first two chapters…but it gets redundant fast. Since so many of the various Arthritic problems use the same drugs, he repeats himself every single time. I kinda saw this as ‘book padding.’ heh. He only needed to describe each drug once… what they do, what the contraindicators are, and side effects. Then he could refer to that section over and over. But no. Typed out in full countless times. Ugh.

He does have a very easy writing style though and he does not talk over anyone’s head in this. It’s easily understandable by us laymen. Any term he does use that may be confusing is fully explained. The one thing I did learn was that a pain I was having around my right ovary is actually indicative of further hip degeneration. That was extremely helpful in itself and worth the price of the book.

I guess I’m going to go with 3 stars for Living With Arthritis, and say that it is a good place to start if you’ve been recently diagnosed, or suspect that you may have an Arthritic condition. I do caution you to not believe everything that is in print though, do further digging and compare notes… but I’d advise that on any research…